The unexpected happened and all of a sudden I found myself in Longbeach, California in May of 2011. There I was ready to meet the Dalai Lama, in person. Wow! It was a feeling I could not even begin to express. For a man that represents so much peace in the world was just such an honor and privilege for me. I was chosen to be part of such an amazing moment in history through Amnesty International. That day I realized that life is what you make of it and also that it is not possible to change anyone and give them of yourself when it is something the do not seek or prioritize in their life. Why that thought came to me as I prepared to meet the Dalai Lama was inconsequential, but there it was. All of a sudden I realized that there is no point in trying to change anyone or giving them something you think they "need" for they are making their own choices, and feeling their own feelings. Compassion means allowance and acceptance of someone as they are. 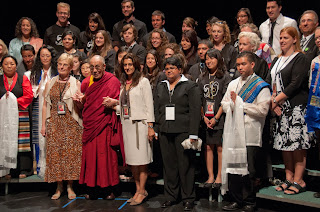 On that day, the moment the Dalai Lama stepped into the room, it was as if a greater consciousness had made an appearance. An immense sense of peace filled the room and also a sense of serenity and happiness. I knew not what he would say to us, but as I stood there listening to him speak, his words filled the room with lightheartedness and laughter as he made jokes about all things. A pleasant smile, a peaceful soul and a being on a mission to create awareness and love in this world.

I am forever grateful for having met his holiness the Dalai Lama and will carry the experience with me for all the days of my life.